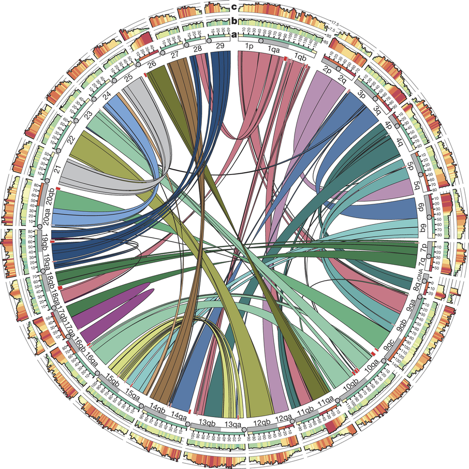 A key question in molecular and evolutionary biology is how the genomic diversity we see across eukaryotic species has evolved. One type of event that has played a major role is whole-genome duplication. After such an event, there are two copies of each gene – and the genes are “free” to obtain new functions (neofunctionalisation), to be specialized for the function for example in a subset of tissues (subfunctionalisation), or to decay. Salmon has a relatively recent duplication (80 million years ago) and presents a unique opportunity to learn about whole-genome duplication and the fate of the genome and each gene after the event. Our analysis shows that after the duplication, large genomic rearrangements took place along with repeat expansions. The extent of repeats presented a major challenging in the sequencing and assembly of the genome. We observe that the number of instances of neofunctionalisation is larger than that of subfunctionalisation. The findings have consequences for the understanding of genomic evolution and the evolution of novel gene functions. The genome presented can serve as a reference sequence for both salmon and other salmonid species – species of high biological as well as economic interest in Norway and internationally.